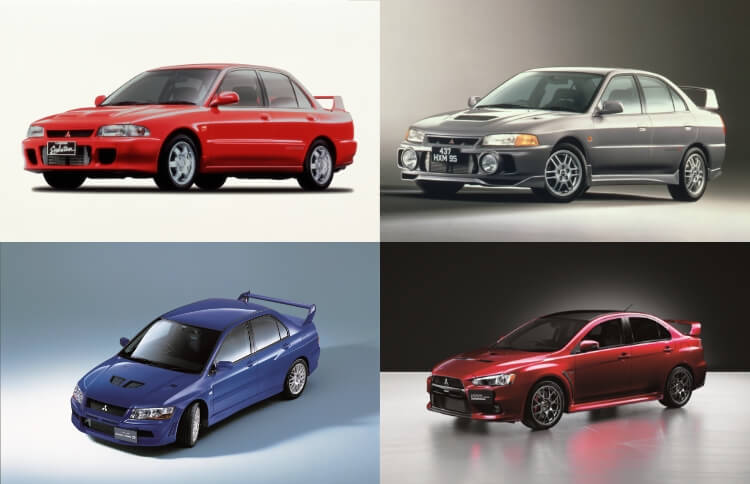 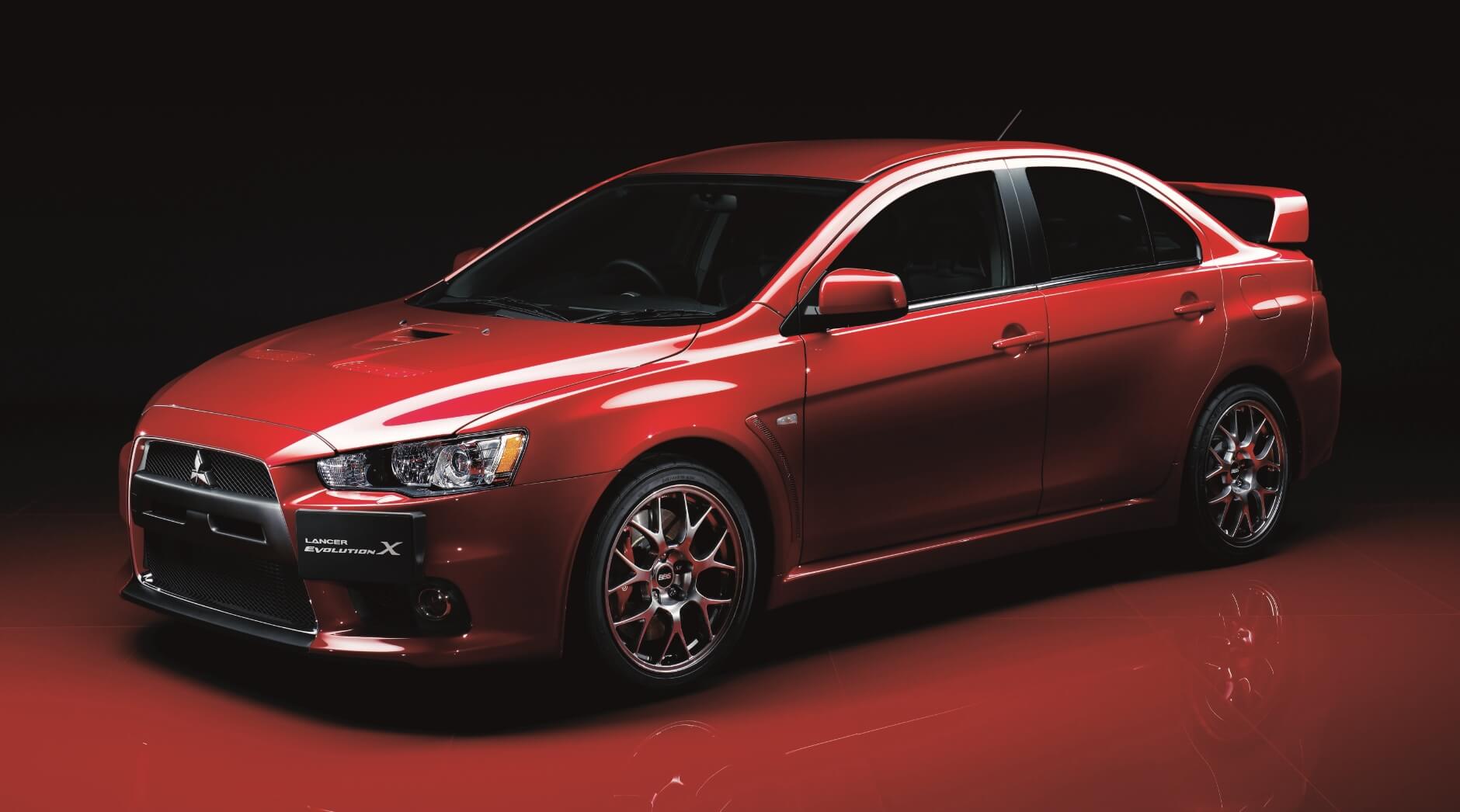 Japan joined the global race between the 60s and 70s, polishing its technology and showing its innovations to the world.

In 1967, Mitsubishi, the winner of the first Australian Southern Cross Rally Colt, took the first Grand Prix in 1973 in the WRC (World Rally Championship) The following year, the first-generation Lancer that Safari Rally one its first championship. After that, the car also shined in the Southern Cross Rally, Safari Rally, and other challenging races. The name “Mitsubishi Rally” quickly became known throughout the world. Australia and the African continent remain popular markets for Mitsubishi cars to this day.

Mitsubishi vehicles then took a break from participating while low emission measures were taken, and in 1981, second-generation Lancer Lancer EX Turbo re-entered, but the WRC Audi Quattro and other high-efficiency four-wheel drive cars took control, leaving the 2WD Lancer behind.

However, after that, due to accidents in the roughly-tuned vehicles of Group B WRC, Group A, with vehicles similar to cars that are driven outside of races, became the focus. This started the second golden age of Mitsubishi. At the time, Mitsubishi had introduced the 1987 Galant VR-4, with a combo of high-performance DOHC turbo engines and a full-time 4WD system: a normal car boasting the competitive capabilities of a racer. In fact, in 1988, the VR-4 debuted at the New Zealand Rally and had taken home six winning titles by 1992.

The foundation of this performance was the champion machine, the Lancer Evolution, introduced in 1992. The base for this was the fourth-generation Lancer that came out in 1991. The vehicle was normal, with a Galant VR-4 2LDOHC turbo and full-time 4WD function transplanted into an ordinary small-type FF sedan. The evolutionary model would meet the number of vehicles needed to be produced for Group A regulations. 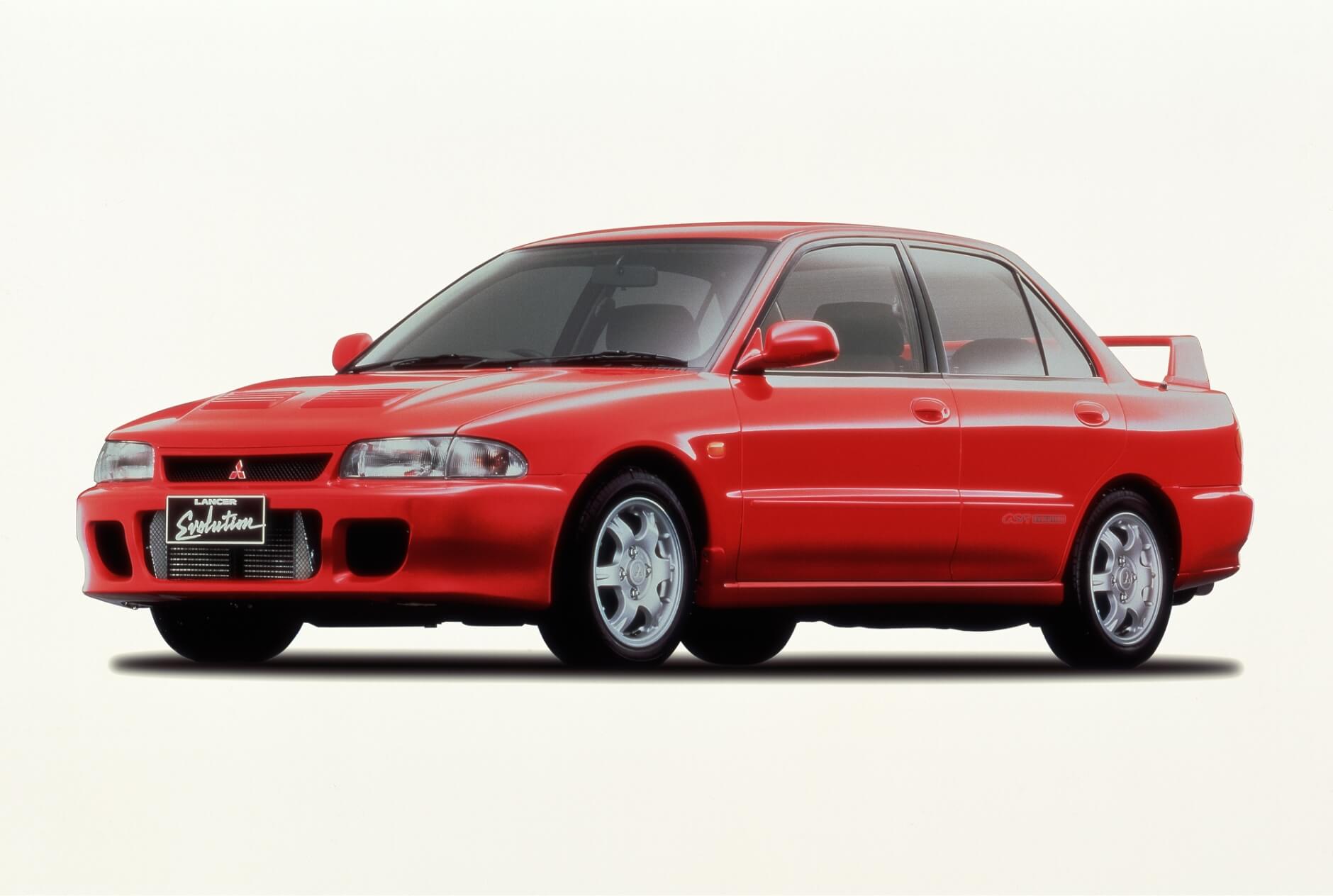 With a light and compact body combined with full-time 4WD made with 205PS high-power and viscous LSD, the car took fourth in its debut race in the 1993 WRC. Following this, the 2,500 vehicles sold out in an instant without any advertising.

However, as the first-generation Lancer Evolution was built quickly, maneuverability was a challenge. As a result, the Evo II in 1994 contained real improvements, such as elongating wheelbase and track with aluminum-forged suspense, bigger rims, and LSD in the rear. The power of the 260PS Evo II showed off in the 1995 Swedish Rally, winning its first WRC championship.

Taking advantage of its success, the finished version of the vehicle came in January 1995 with the Evo III. The basic mechanism was identical to the Evo II, but power was bumped up to 270PS. To prevent turbo lag, a secondary air injection system and other features were also installed. Above all, the car’s unique “Gundam look,” with its front open aperture bumper and large wing uncharacteristic of a sedan, emitted prowess as a competitive machine.

Unapologetic of its appearance, the Evo III took six wins between 1995 and 1996. In 1996, Tommi Mäkinen shone as a champion driver. 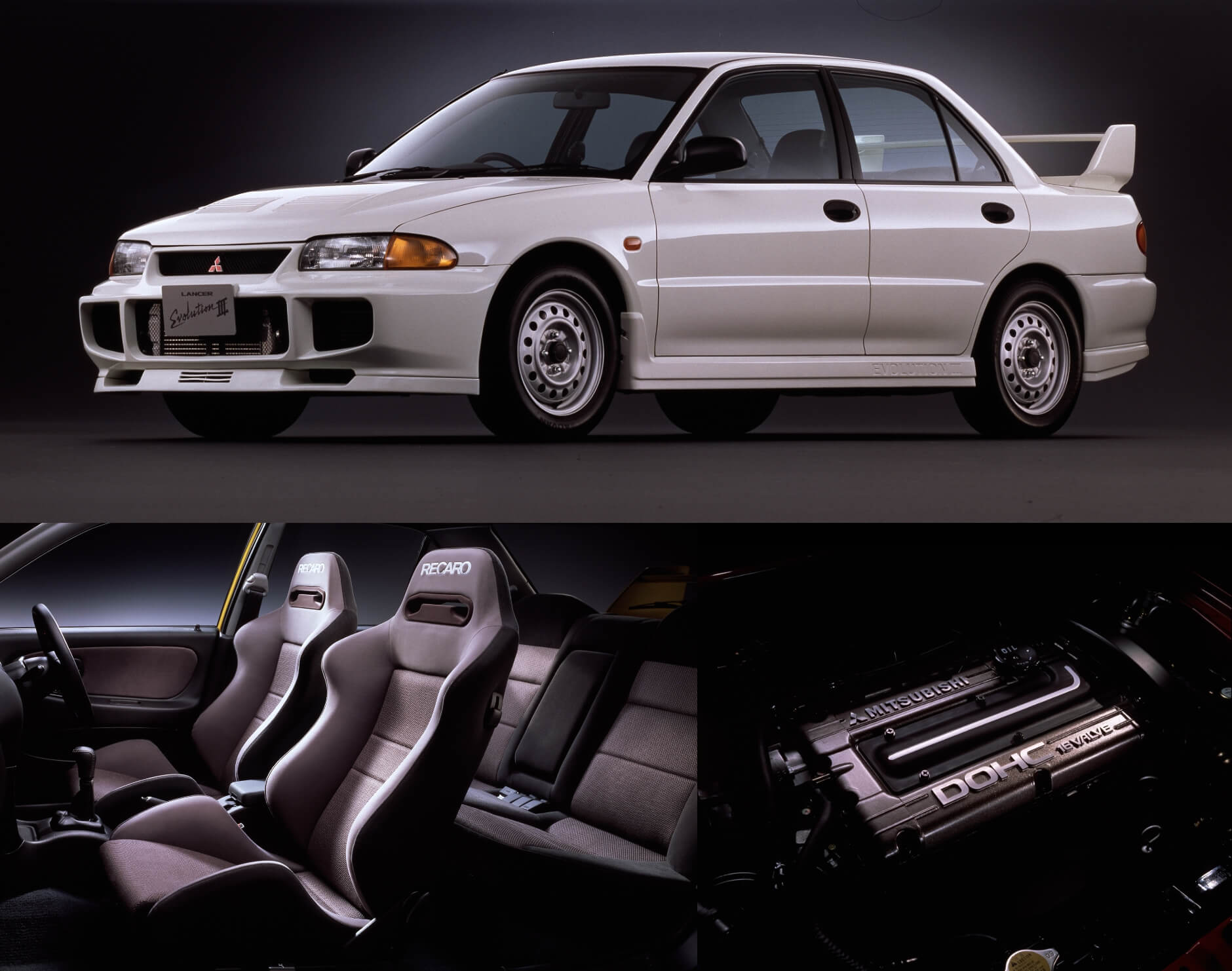 The Evo IV brought a major change to the lineup. It was the base Lancer for the 1995 model change to the fifth-generation, and its mechanism had transformed significantly.

Most marked was the change in engine placement. Mitsubishi FF vehicles until then had been on the left side, towards the wheel and forward movement of the car, with the transmission on the right––a rare layout. The engine motion had become backward from the normal movement, resulting in a reverse-moving axel in the transmission. The fifth-generation Lancer improved this and the reverse axels were no longer needed.

Due to this, the Evo IV, debuting in 1996, was equipped with an engine style the same as the 4G63, but on top of the 280PS, the loss of driving force was reduced, as well as car weight. On top of this, along with the Galant that was introduced in the same year, the vehicles were the first in the world to employ an AYC (Active Yaw Control) system to move the torque in the left and right rear wheels. This solved the issue of difficulties in turning with 4WD.

The vehicle racked up six wins between 1997 and 1998 in the WRC, and Tommi Mäkinen took the drivers’ title in 1997 for a second time. The design of the Lancer Evo was also well-received, and the car’s racing success made it even more popular. 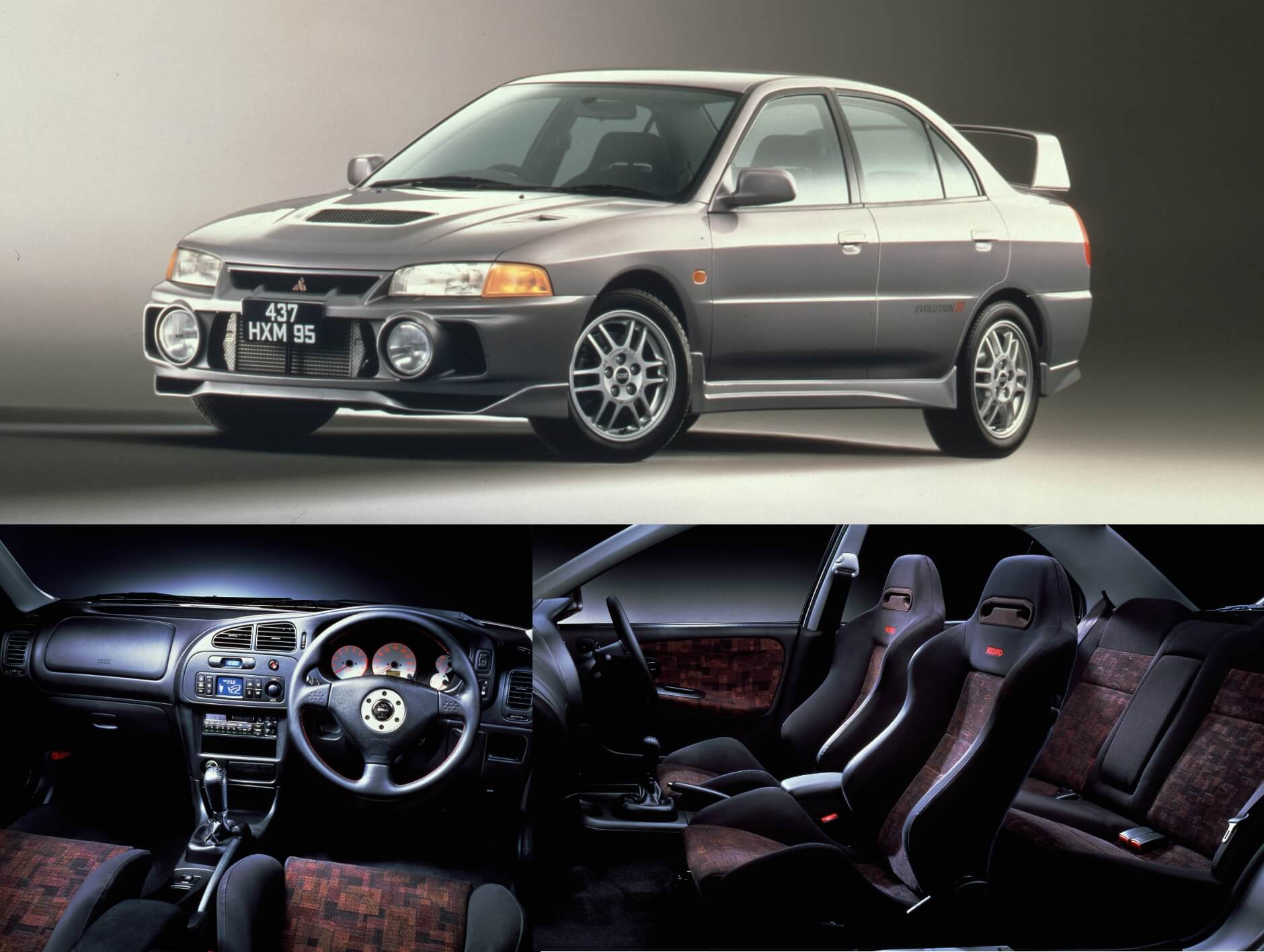 Coming out in 1998, the Evo V evolved further. The WRC had been redesigned extensively, and the regulations required more powerful WR cars. To rival other Group A cars, a three-number wide fender had become standard and the track was increased. Larger tire rims and a Brembo brake caliper were added, and CPU and turbin were upgraded, making a more competitive vehicle. The result was that the Evo V against the powerful Volks WR car, took Mitsubishi’s first manufacturers’ title in the 1998 WRC. This added a third drivers’ title for Tommi Mäkinen. In addition, the car performed in the Group N rally championships. 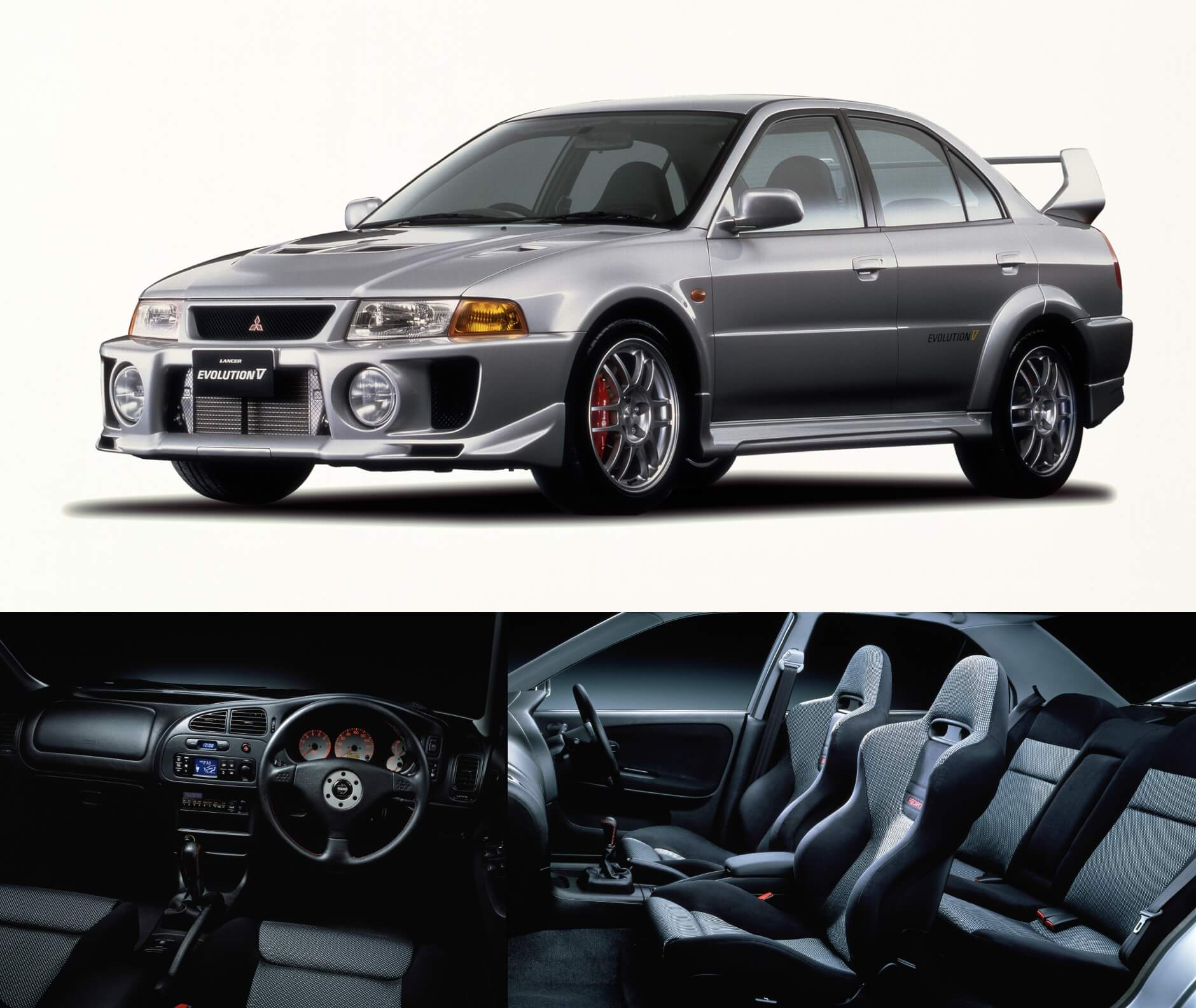 The 1999 Evo VI featured an electric control system introduced the second half of the WRC season, leading to Tommi Mäkinen fourth title. The Tommi Mäkinen edition was sold in the same year to commemorate the success.

The Evo VII, VIII, IX were based on the sixth-generation Lancer developed in 2000. However, for the WRC Volks participation, they were WR cars, sold mainly for domestic motorsports and private teams.

In 2003, the Evo VIII arrived at 40kgm torque. The super AYC and 6MT were also equipped, using a rear differential in the planetary gear for improved cornering function. Evo IX in 2005 came with variable valve timing, reaching a superior level. 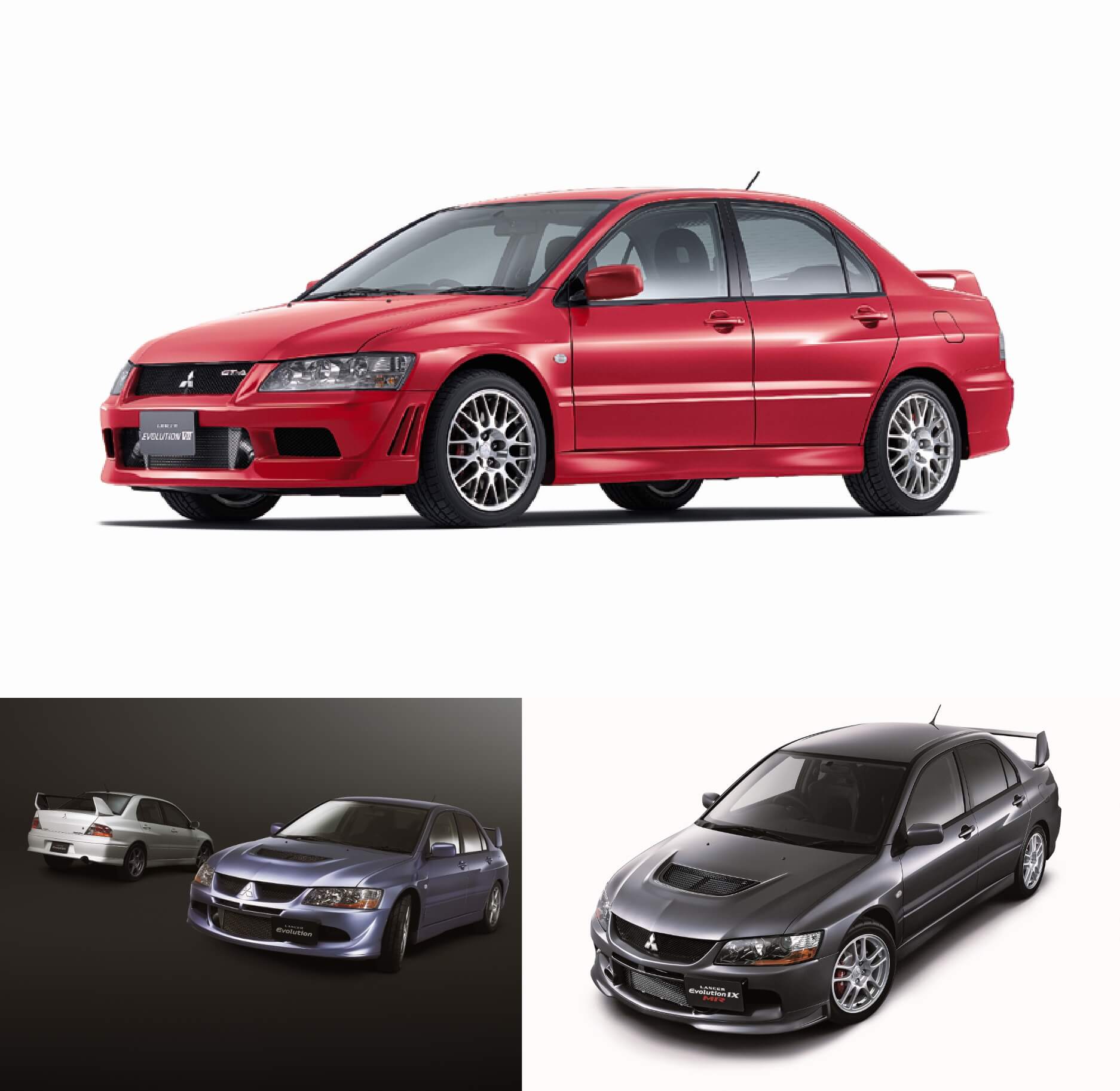 The final Lancer Evolution came in 2007, with the X. The sports sedan bore the Lancer name, but was a class above, with a Galant Fortis base. A new aluminum engine and 2-pedal transmission with twin crunch were used, creating a vehicle that allowed anyone to safely enjoy driving a sports car. 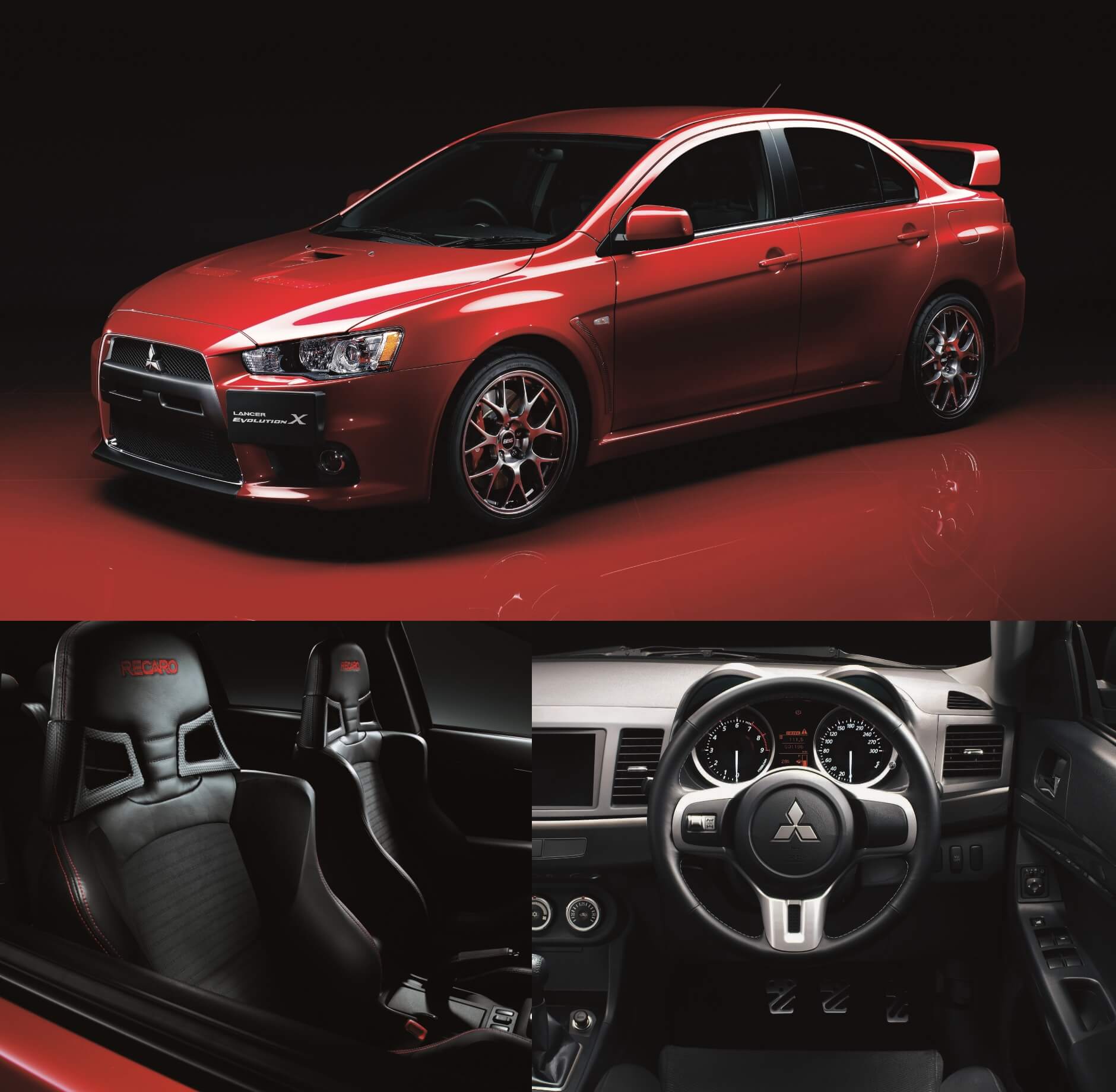 Changes in the Lancer Evolution

1992
- The GalantVR-4 DOHC turbo and 4WD is transplanted into the fourth-generation Lancer, creating the Evo I.

1994
- The Evo II evolves with its larger rims are fitted and other details. First WRC victory.

1995
- The large aperture bumper and jumbo wing give the Evo III a “Gundam look.” Awarded drivers’ title at the 1996 WRC.

1996
- The fifth-generation Lancer is used for the Evo IV base. The engine placement changes and a torque vectoring system, AYC (Active Yaw Control), is introduced. Takes drivers’ title at the 1997 WRC.

1998
- Blister fender and track are widened for the Evo V. Takes drivers’ and manufacturers’ titles in 1998 WRC.

1999
- Number is put to the left side for the Evo VI. 4WD and electronic control system introduced. Fourth successive drivers’ title awarded at the 1999 WRC.
- Tommi Mäkinen edition was released at the end of the year to commemorate the fourth drivers’ title win. Paved road setting.

2001
- Evo VII uses a sixth-generation Lancer base. An ACD (Active Center Differential) is placed to balance the front and rear torque.

2003
- ACD, AYC, sports ABS are combined and improved in the Evo VIII.

2004
- An aluminum roof and other strategic improvements are made for the MR edition release.

2005
- MIVEC, organized with variable valve timing, is installed in the Evo IX.