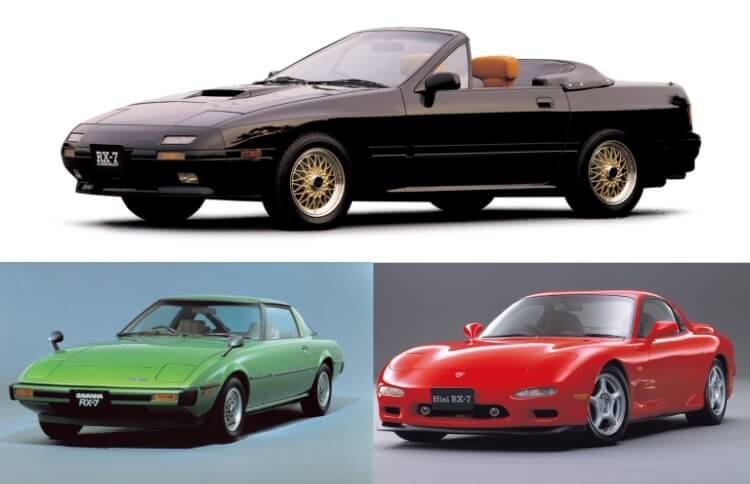 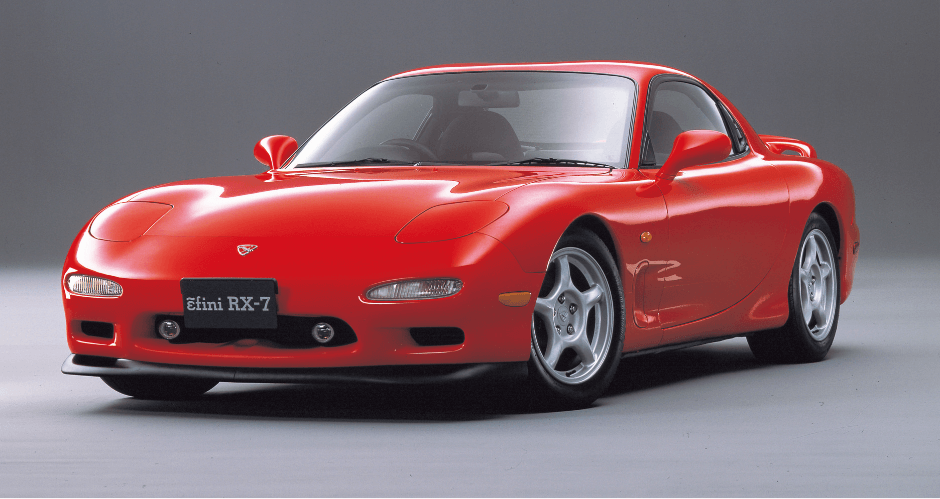 Better or worse, the fate of Japanese cars is in the American market. Especially the sports car product planning would not be possible without the North American market. The model that symbolizes this is the RX-7, which made a name as the world's only mass-produced rotary sports car.

At the time of debut, it used to be called Savanna RX-7 and in the middle of the bubble economy, AnfiniRX-7 was born as the third generation. It was forced to be renamed to the Mazda RX-7 due to the failure of the manufacturer's multi-channelization. Even though the sports car were swayed by the international situation and the situation in North America, they still left a strong impression on many people.

Mazda's rotary engine was developed in search of original technology. It was developed to withstand the industry restructuring policy of the Ministry of International Trade and Industry (now Ministry of Economy, Trade and Industry) under the pretext of protecting and nurturing the Japanese automobile industry. In 1959, when Dr. Wankel of West Germany and NSU (now Audi) announced the successful development of the rotary engine in 1959, Tsuneji Matsuda, President of Toyo Kogyo (now Mazda), promptly proceeded with negotiations for a technical cooperation agreement, and it was signed in 1961.

However, the prototype rotary engine of NSU was far from completion, and only Mazda succeeds in mounting it on a mass-produced commercial vehicle. In 1967, the engine was installed first to Cosmo Sport, which was an expensive car and close to handmade, since then, the number of cars were equipped with rotary engines has been increased and spread, such as Familia, Luce, Capella, and Savanna. 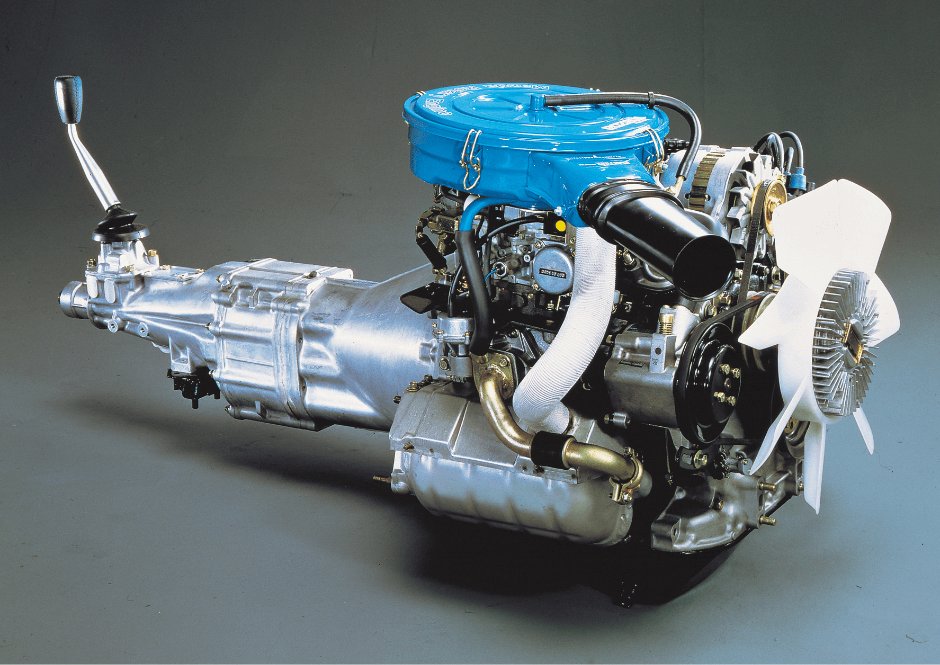 Unfortunately, the misfortune hit when the company quickly cleared the exhaust gas regulations and expanded its sales performance in the North American market. The oil shock broke out in 1973, and the rotary engine cars labeled "Gas Eating" stopped selling quickly. The development team made an effort to improve fuel efficiency and achieved a 40% improvement in just a few years, but it was no longer possible to equip a utility vehicle with a rotary engine.

The decisive factor for the revival from that point was the RX-7, which was later called the rotary rocket. The trigger was a thorough market research in North America. As a result, unlike Japan at the time when sports cars were even equated with gangs, in the North American market, young and old men and women were interested in a wide range of sports cars, and if there was an attractive sports car at a reasonable price, they would use it for commuting to work or school. 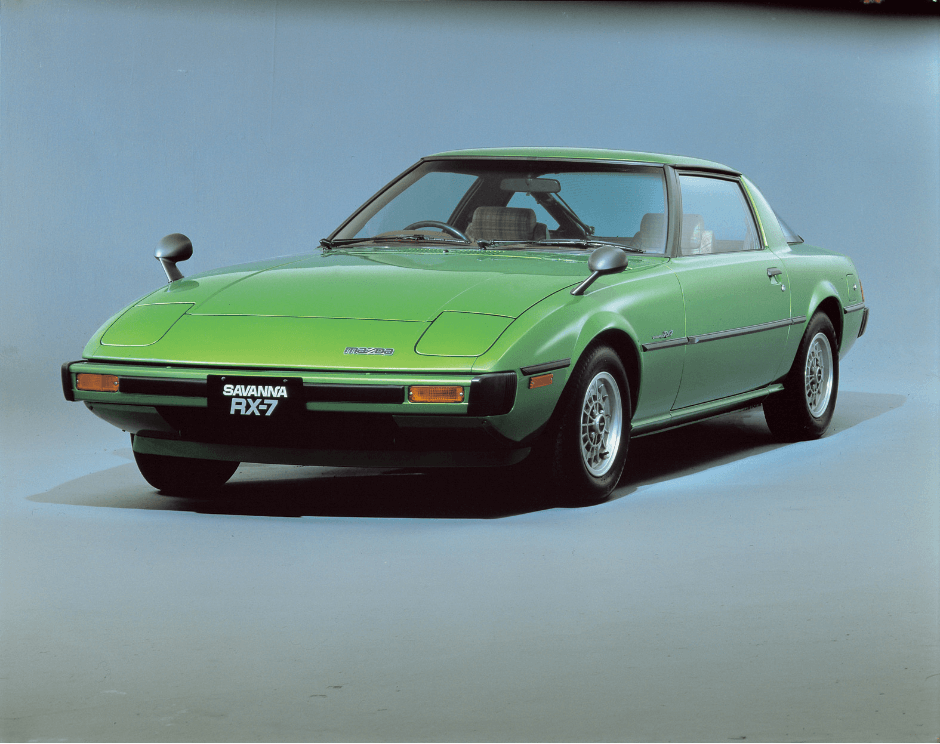 When the first RX-7 was planned in 1975, the goal was to sell it for under $4,000. The exchange rate at that time was around 300 yen per dollar. If converted into Japanese yen, it was about 1.2 million yen, and was close to the vehicle price of the RX-7 actually sold in Japan.

However, around this time, the yen appreciated rapidly. In the spring of 1978, which is about to be released, the price will drop below 200 yen for a moment. After all, the release price in North America was 6995 dollars, which was far beyond the target. Even so, customers rushed to the dealers to get the car even with $1,000 premium. In the latter half of the model, the yen's appreciation advanced further and the local center price exceeded 10,000 dollars, but it still maintained annual sales of about 50,000 units. Even at that price, it was less than half the Porsche that many Americans wanted, and yet the performance was close to Porsche.

While the first generation RX-7 has been active in races around the world, it has also gained popularity as a casual category called secretary car used by women who work as intended in North America to commute. For Japan, which received an unprecedented order of 12,000 units in a month from its release, a turbo car was added in 1983, and the power as a sports car has steadily evolved. However, the continuing appreciation of yen changes the standing position of the RX-7.

In 1985, when the second-generation FC3S type RX-7 appeared, the finance ministers of major countries and the central bank governors met in New York to make a plaza agreement to allow the world to accept the weak dollar. After that, around 1987-88 when Japan was in a bubble economy, around 120 yen became the common rate.

As a result, the RX-7, which is produced only at the Hiroshima factory, could no longer be kept in an affordable commuting sports car category. The second-generation RX-7 is equipped with an intercooler turbo as a basic, and powers up to 185PS in the beginning and 215PS in the latter half. Turbo cars were introduced in overseas markets, which was only sold in North America in the first generation. It finally evolves into a full-scale sports car after the changes were made such as the rear suspension becoming independent from the semi-trailing arm, and the brakes changes to 4-wheel discs. 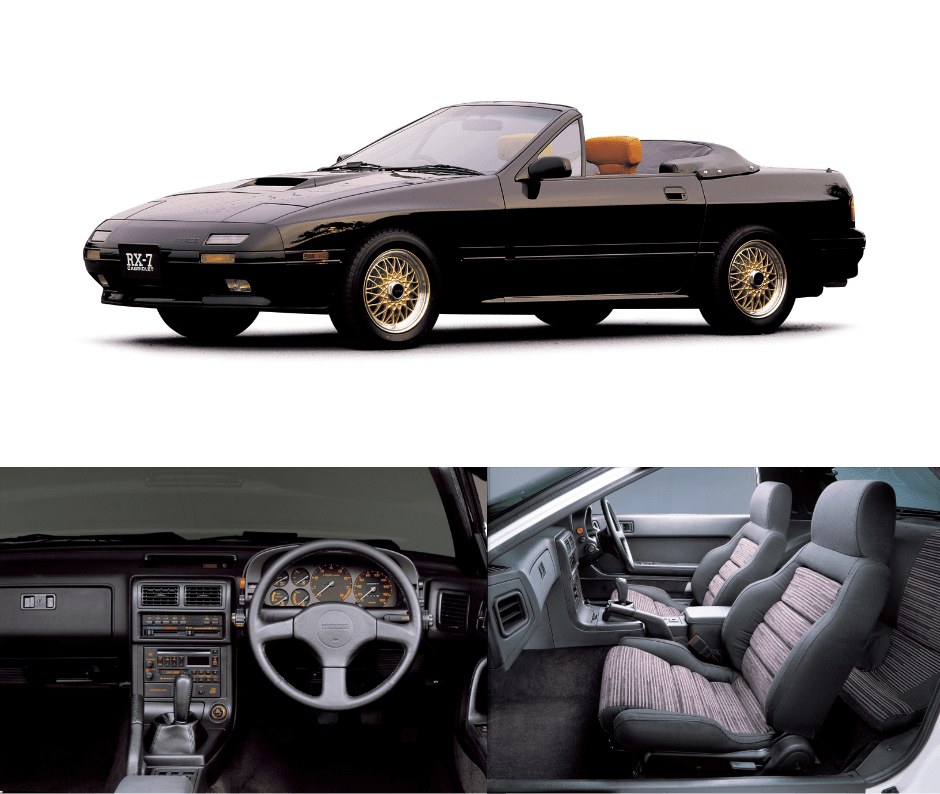 The flow was the same for the 3rd generation FD3S type that appeared in 1991. At that time, Mazda was working on multiple channels, and the RX-7 was given the alias of the InfiniRX-7 as a signboard of the newly established Infini store.

The rotary engine that was made into a sequential twin turbo was initially 255PS. In 1999, it reached the 280PS, which was the voluntary regulation value for Japanese cars at that time. Four-wheel double wishbones were gorgeous around the undercarriage, and no one called the beautiful running and the design “poor mans’ Porsche” anymore. It has become a brand recognized as a pure sports car all over the world.

However, the time period did not allow the existence of such a unique personality. In the 2000s, insurance premiums for high-performance sports cars soared in the North American market. The RX-7, which had become the representative, could no longer aim higher. With the exhaust gas regulations becoming stricter year by year, the RX-7 finally ended production in August 2002. By the way, the RX-8, which was the successor to the rotary engine, has a rear seat that adults can ride in order to avoid being certified as a two-seater sport with high insurance premiums. It has a rear door with a double door, and became a model for different product planning from successive generations of RX-7. 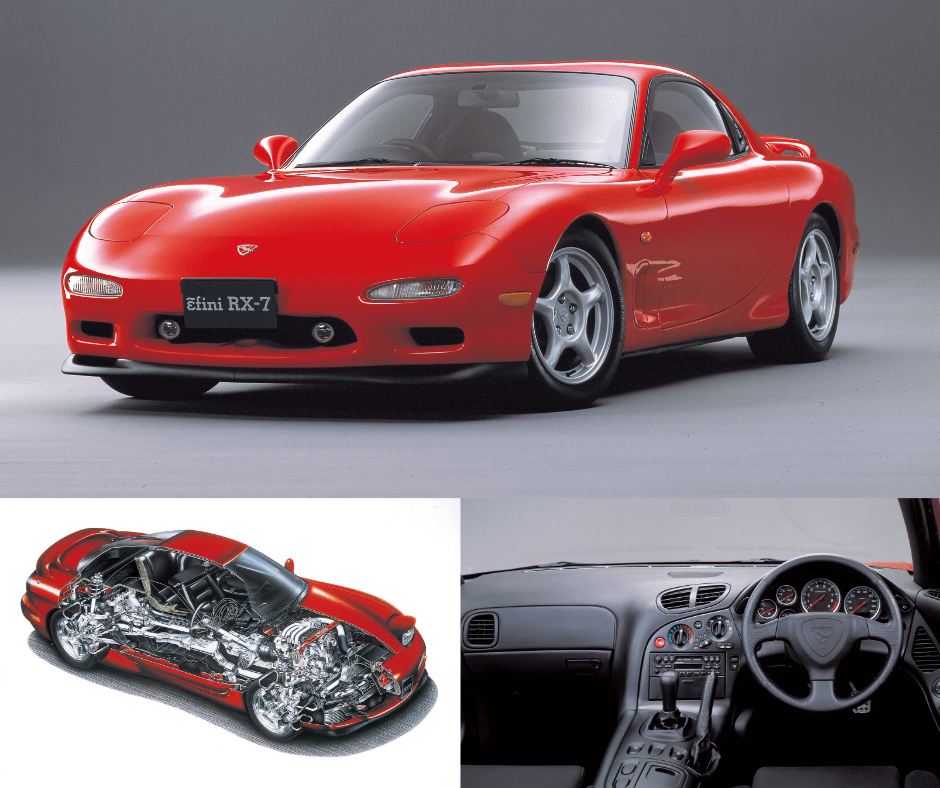 1985
- The second-generation Savanna RX-7 (FC3S) is released. Rotary turbo 185PS from the beginning.

2002
- Discontinued due to tightened emission regulations.